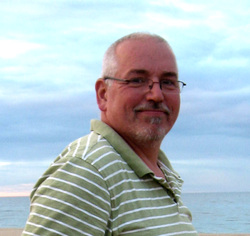 Michael Hitchcox has had a career that serves to be a model for any young artist.  Over the last thirty years, Michael’s work has been seen throughout galleries across the Greater Toronto Area and on television screens across North America.  His ability to capture the true essence of his subjects has made his work a popular choice amongst art collectors. Additionally, his work in animation has been seen by millions and has given him the opportunity to work on many award winning programmes.  He has had a vast amount of experience working with water-colours, oils, and acrylics as well as a variety of CG software.

Graduating from the Ontario College of Art and Design (OCAD)  in 1984, Michael developed the signature style that can be seen in his paintings today.  In the initial years of his career, Michael became known around the Oakville area for his one-man art exhibits that took place at a variety of galleries.  It was during this time that Michael made a name for himself throughout the G.T.A. and became known for his many landscapes of the local region.  Some of Michael’s most popular work includes his seasonal interpretations of Bronte Harbour, the paintings of various local churches, as well as nearby farmhouses.  Additionally, Michael is known for several paintings of other regions in Ontario and also Cape Cod, Massachusetts (his favorite vacation spot).  He continues to be an in demand artist today for commissioned work.

In 1987, Michael joined Nelvana Studios and went on to serve as the Background Supervisor for eight years.  During his time at Nelvana, Michael worked on over fifty animated series which included The Magic School Bus, Beetlejuice, Gargoyles, Little Bear, Care Bears, Babar, Franklin, and My Pet Monster.  His work for Nelvana included using both traditional techniques as well as CG.  In his role of Background Supervisor, Michael helped to develop new concepts and styles for series productions, established colour keys, screened possible candidates and trained new artists.  Michael has also worked for Studio B productions where he painted colour keys for a variety of productions and was invited to be guest background artist in 1995 and 1997, helping to train new artists in the background department.  He has also continually worked for Chelsea Roads Productions, Big Soul Productions, Pheonix Animation, 9th Story, and  Atomic Productions where he recently worked on Transformers Rescue Bots.

Since 2004 Michael has been a faculty member within the Sheridan College animation department.  He has taught colour and painting technique courses for the Con-Ed program and developed fundamental painting and background courses.  Currently, Michael is instructing background painting in both traditional methods and Photoshop for the second year BAA animation course.  Michael highly enjoys being able to educate new talent and share his experience.

Michael has lived in Oakville for many years with his wife Brenda along the Bronte harbourfront.  Their three children (Andrew, Jenna, and Natalie) are all currently working on establishing their careers.  Michael enjoys spending time outdoors, working in the garage, and taking the family dog, Toby, for daily walks. 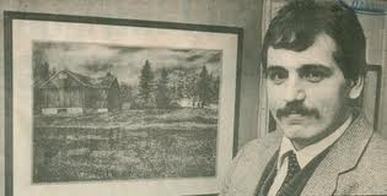 Michael at one of his classic art shows in Oakville, Ontario.